I woke up this mornin’ with my mind, stayed on freedom…

Today I had the privilege of exercising my right to freedom of expression once more. It’s one of the perks of living in DC that there’s always opportunities like this whatever your political, social, or religious stripes may be.

Today’s march was a gathering of ministers from all faiths to remember, recommit, and call others to the dream that Martin Luther King, Jr. shared in this city 54 years ago. The 1000 Ministers March for Justice. (Although I’m pretty sure we got way more than 1000!)  We’re still dreaming and we’re still marching for that dream and that we’re still seeing the same tired rhetoric of White supremacy in response is wearying.

But today I march. 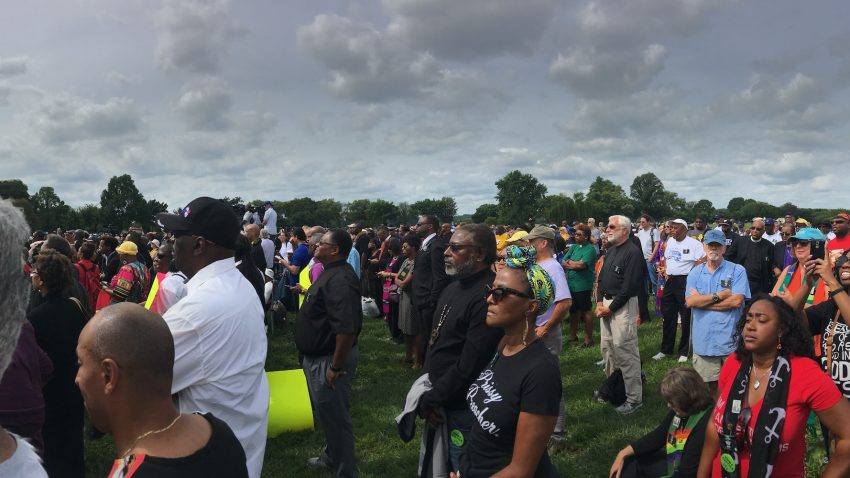 My M.Div was from the Iliff School of Theology in Denver, CO. I had the honor of studying under a wide range of scholar/activists including Dr. Vincent Harding who taught Religion and Human Transformation. Dr. Harding quickly became a role model for me as we shared a contemplative spirituality that undergirded a strong commitment to social justice rooted in the gospel of Jesus Christ. In his typically unassuming way, Dr. Harding would often say things like, “We were all trying to think of what we should do next and my wife and I would walk down to Martin and Coretta’s for tea to talk things over.”  It’d be a beat or two before this young white man who grew up in Indiana to realize he was talking about Martin Luther King, Jr. and his wife, Coretta Scott King, on a first name friend basis. Dr. Harding was a direct link to a history I grew up thinking of as something “in the past” or a time that was “over” in American history. Because of Dr. Harding, I learned it is far from over. I march today, as I’m sure many others do, because I sat at his feet, learning from his wisdom and pain, and learned to march with it.

Dr. Harding’s class was a late afternoon class for me and at the end of a very busy day that quarter. I’d arrive weary but ready to sit and watch the PBS documentary, Eyes on the Prize, then engage in discussion. At some point, my inner musician started absorbing the songs of the marches in the documentary and I’d arrive for class humming, “I woke up this mornin’ with my mind, stayed on freedom,” with a weary tone. It never failed to make Vincent get a wry knowing grin on his face. Because I’d wore about it in his class, Dr. Harding knew I had regular running battles to ensure I got ASL interpreters for my classes. The ADA was new, Iliff had never had a Deaf student before, and the person in charge of accommodations was a half time administrator who also was in charge of all diversity issues. It was the standard early 90s institutional intertia mess (another march we’re still marching.)

So as I got up today to come march, you know what song came into my head,

I woke up this morning with my mind, stayed on freedom…

I march like a Boston University School of Theology grad.

I went to the BU School of Theology for my Ph.D. in Practical Theology somewhat as a fluke. I had applied for the program under the Religious Studies Division as they were a Ph.D. program at the time and the Practical Theology program was a Th.D. I wasn’t sure if the Th.D. would make me as marketable as a scholar looking for a teaching appointment as many people have never heard of Th.D. and mix it up with D.Min., which is a doctorate program aimed at practice of ministry rather than a degree focused on scholarship and teaching. However, when they got my application, I was told, “I think what you want to do at the nexus between the church, community, and theology fits the Practical Theology program better.”  So I was accepted into that program instead. Along the way, the Th.D. program converted to a Ph.D. program as the concerns about marketability were on their minds too. There was no real difference in the curriculum at the switch as the same focus on academic research and lived experience was maintained.

On the way through that program, I’d walk past reminders of the best of what Practical Theology could be. A window for Anna Howard Shaw, one of the first women to graduate from the BU School of Theology, reminded me that being a pioneer was tough work. Whether it was her childhood on the frontier in Michigan preaching to trees or having to support herself with work through her theological education while her male peers were fully funded, she persisted and became a national leader for women’s rights.

BU was also the alma mater of Martin Luther King, Jr. as well. He got a Ph.D. in his time as he embodied the melding of academics  with social justice in our ongoing march for the rights of African-Americans in the Civil Rights movement and all people who found themselves stuck at the bottom of the economic ladder with no way to climb in the Poor People’s Campaign.

BU was also a place where I found less inspiring reminders of other ongoing struggles. Because he was a wealthy benefactor of many things in Boston, including BU, Alexander Graham Bell has a memorial window in the BU chapel. His wealth came largely from the Volta prize for the invention of the telephone. But his fame/infamy was largely built on his public efforts to meddle with the education of Deaf people by banning the use of signed language and forcing students to speak and use whatever hearing or speech reading they may have had. This oralist approach has been a disaster that we’re still feeling as Deaf people’s educational opportunities are significantly less than hearing peers. Bell was also a founding member of the American Eugenics Society as he advocated to prevent deaf people from marrying and having children because of what he viewed as our “defective genes” despite his own research showing that a vast majority of Deaf people are not deaf because of genetics. The enshrinement of eugenics is, of course, something that found its most terrifying expression in the Nazi “final solution” leading to the systematic murder of millions of Jews, Roma, LGBTQ people, Jehovah Witnesses, people with disabilities, and political prisoners.

Seeing that window as I walked into the chapel for my matriculation service as a new student dredged up a lot of feelings and trepidation. It was the reason I decided I would not be attending chapel services in that building again and a chief reason in opting not to participate in hooding and graduation ceremonies for my Ph.D. I had already defended and gotten my degree months before as I defended after the previous year’s deadline for graduation so by the time it came time for the ceremony, the charm had worn off. Also, my family was celebrating my niece’s graduation from high school that day and it seemed a better use of my time!

I marched knowing I stood on the shoulders of giants of the past but also that, as a teacher at Gallaudet University, I’m also building a foundation for future marchers. One of my colleagues at Gallaudet University, Dr. Teresa Blankmeyer Burke, posted this on her Facebook page this morning as we all geared up for the first day of classes in a new academic year,

It never gets old, this first day of school! These days, my excitement comes from the incredible privilege of having a job where in some small way, I get to support people who have made a choice to transform their lives through higher education.

On this day, I always remember deaf people who, by accident of time and place, never had the opportunity to acquire language, and deaf people who did fully acquire language, but who had the bad luck to be born in a place with very limited opportunities — did you know there are countries where sign language interpreters are not professionally trained and where the indigenous sign language isn’t even documented? Countries where there are few (if any) public resources for deaf education, hearing aids, cochlear implants, or assistive technology? Where there is no CART captioning or people trained to provide this service? Imagine trying to get an education in such a place! And now, think of the opportunities that a place like Gallaudet University offers as a bilingual educational institution of higher education.

Each term, I have a few international students who have travelled far to come to Gallaudet University. These students have learned our languages of instruction, ASL and English as third and fourth languages (sometimes fifth and sixth languages!). Our international Gallaudet University alumni have historically done great things when they have returned to serve their home deaf communities. On this first day of school, I worry that the chill of the current climate deters smart, committed, hard-working international deaf students from coming to Gallaudet University — the only liberal arts university in the WORLD with a bilingual mission serving deaf, hard of hearing, and hearing students. I worry that current trends in visa issuance here in the U.S. may have profound and lasting effects on deaf people’s lives throughout the world in years to come.

As always, on this first day of school I am humbled and thrilled to be a part of my students’ intellectual journeys — it is truly an honor and a privilege. Special thanks to Jane Hurst and Jane K. Fernandes for taking a chance on hiring me so many years ago.

Reading that while heading out to the march let me connect what I’m doing in the morning, marching for justice, with what I’m doing in the afternoon, teaching ethics in a way I haven’t felt so connected since sitting in Dr. Harding’s classroom. Having just helped organize the 4th Global Methodist Missions Conference of the Deaf earlier this month, I saw first hand the amazing spirit that explodes when we gather Deaf people from around the world. I also experienced the frustration of not being able to get everyone together as our visitors from Zimbabwe found their entry visas denied twice despite all the letters of invitation, support, financial assistance to apply for visas and travel, etc. we had put together. So as I get ready to greet a new semester and a new sea of faces in my classes this year, I’m reminded of where I come from on my personal and intellectual journey and I’m humbled to be a part of the journeys I see unfolding before me. It’s a great thrill to know I’ve got two former students now in seminary programs and a third preparing to enter a program soon. It’s also a thrill to see many other former students doing fantastic things like The Daily Moth, Cordoba Magazine, and scattering around the nation and globe with knowledge about interfaith and non-religious understanding and engagement they worked their way to in a classroom with me.

This year is off to a great start.

Because today, I marched. 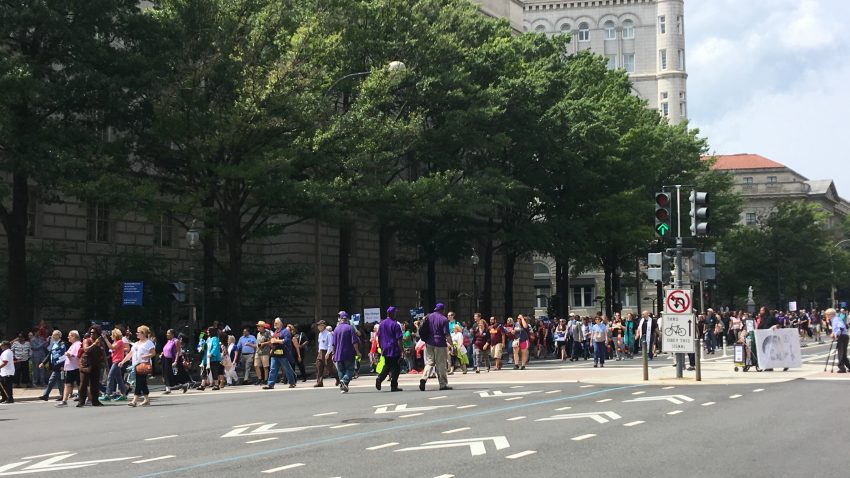